International Mountain Day was celebrated at the UNIMONT campus of the University of Milan based in Edolo (BS), on Monday 12th December 2022. The event was organized by the Department for Regional Affairs and Autonomies of the Presidency of the Council of Ministers, with the support of the UNIMONT Centre of the University of Milan. Two hundred participants took part in Edolo and as many online to share a new “vision” for mountain territories that takes into account their specificities.

The morning session, moderated by Prof. Marina Carini (Delegate Pro-Rector for Third Mission, Cultural Activities and Social Impact – University of Milan) opened the event with institutional greetings from: Giovanni Vetritto (Director of the Mountain Policies Office, Presidency of the Council of Ministers – Department for Regional Affairs and Autonomies), Luca Masneri (Mayor of Edolo), Alessandro Bonomelli (President of Comunità Montana and BIM di Vallecamonica), Samuele Alghisi (President of the Province of Brescia), Massimo Sertori (Councillor of Local Authorities, Mountains and Small Municipalities – Lombardy Region), Davide Caparini (Councillor for Budget and Finance – Lombardy Region) and there was a video message from Attilio Fontana (President of the Lombardy Region).

The Minister for Regional Affairs and Autonomies Roberto Calderoli intervened online, announcing a law for mountain areas: “This appointment for International Mountain Day has provided us with the opportunity to reiterate a fundamental concept: a commitment for mountain areas must translate into structural and perfectly tailored intervention, given that the mountains are full of potential, not marginalized areas. Personally, I reiterate my commitment to present a law on mountain areas that is a government initiative, with the aim of guaranteeing a parliamentary process that can reach a positive conclusion. We have also decided to implement tangible actions in the interest of mountain territories and the citizens who live there, through various initiatives. We are working to quickly disburse the state portion of 15 million euros of FONSMIT, with the aim of guaranteeing 11 million euros for support in this difficult moment for ski lifts with artificial snow and at the same time investing 4 million euros in female entrepreneurship to support innovative start-ups of those women who “move mountains”. We also plan to confirm the over 200 million euros of contribution to FONSMIT, doubling the resources available in 2023. I echo the words of Pope Francis, who defined the mountain as a wonderful and extremely important resource, both for humankind and for the planet. Politics can and must work with a view to promoting the sustainable development of these areas, my work is concentrated in that direction”. The Minister also praised the commitment and passion of the UNIMONT campus of the University of Milan in offering prospects and opportunities to students who attend its university courses and underlined that young people represent the future not only of the mountains but of the whole of Italy.

The morning continued with a speech by Prof. Anna Giorgi (University of Milan – UNIMONT Centre) who highlighted the need to implement new development models based on the resources, uniqueness and vocations of mountain territories to put mountains in the “centre” and build a specific vision for these territories, free from stereotypes.

Next, the testimonies of women who “move mountains”: Gloria Carletti (Mayor of the Municipality of Foppolo and President of the College of Ski Instructors of Lombardy), Noemi Guzzo (Expert in Territorial Marketing), Silvia Lodetti (Communication and marketing – ML Engraving – Onore), Maria Elena Buttari (Freelance planner and promoter of territorial development – Sora) and Valeria Leoni (PhD student at the University of Milan – UNIMONT campus). The closing of this session was entrusted to the reflections of Claudia Sorlini (Prof. Emeritus of the University of Milan and Vice-President of the Cariplo Foundation) and Marcella Gargano (Director General of the higher education institutions of the Ministry of University and Research).

TO SEE THE RECORDING OF THE MORNING: CLICK HERE

What do mountain areas need? Which are the mountain municipalities in Italy? What to do? These are the questions that characterized the afternoon session of today’s meeting, which involved the main stakeholders and political parties in two round tables moderated by Riccardo Baldazzi (Director of “Centro Valle”). In the round table of the stakeholders, dedicated to a reflection on the needs of the mountains, Gianfranco Pederzolli (President of FederBIM), Giuseppe Cuc (President of the Collegio Maestri Sci), Martino Peterlongo (President of the Alpine Guides), Massimo Manavella (Alpine Refuges) and Agostino Da Polenza (President Ev-K2-CNR and MOUNTAIN GENIUS). The political round table, dedicated to laws necessary for mountain territories, saw the contribution of: Enrico Borghi (Partito Democratico), Luca De Carlo (Fratelli d’Italia), Mauro del Barba (Azione-Italia Viva), Antonino Iaria (Movimento 5 Stelle), Alessandro Panza (Lega) and Roberto Pella (Forza Italia).

TO SEE THE RECORDING OF THE AFTERNOON MEETING: CLICK HERE

A light lunch and an aperitif with local products by young mountain entrepreneurs confirmed that the enhancement of mountain territories passes through the promotion of its unique products. 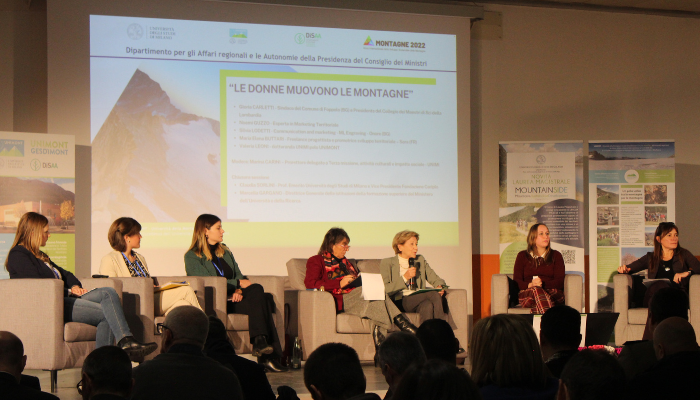 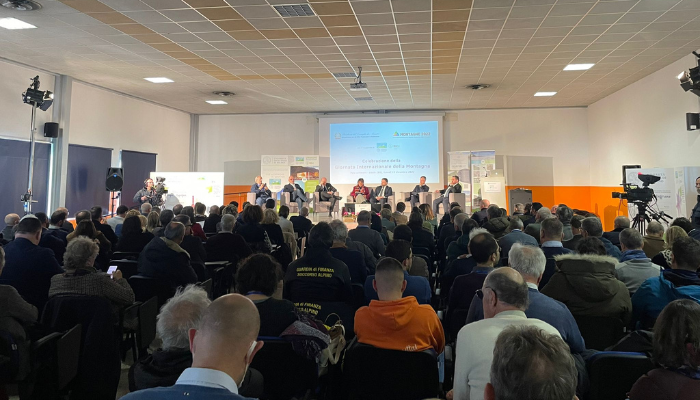 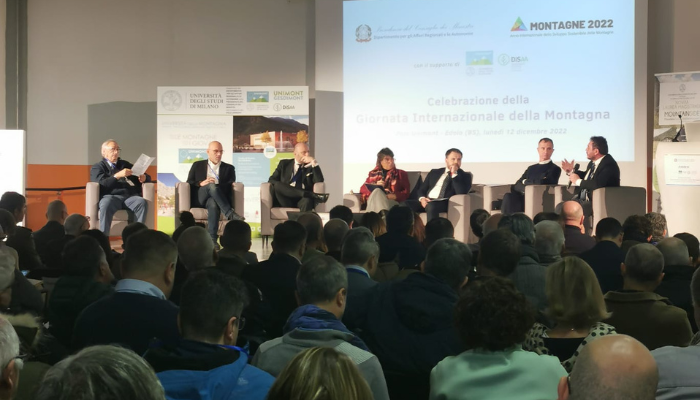 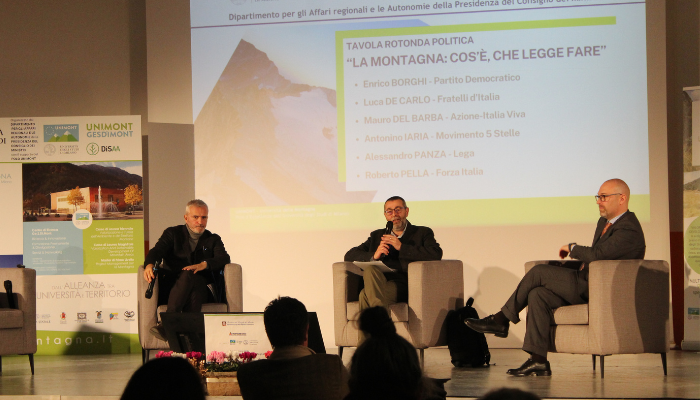 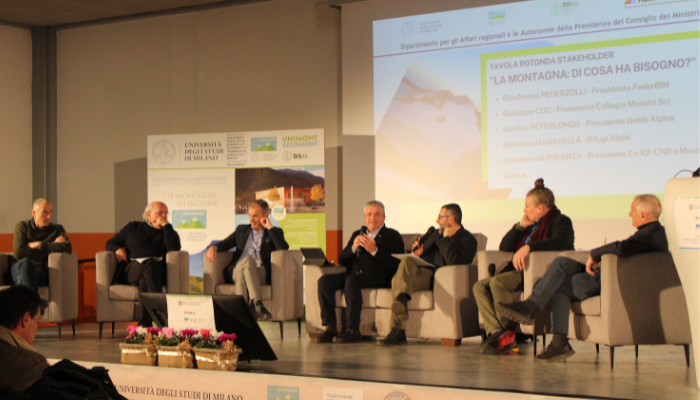 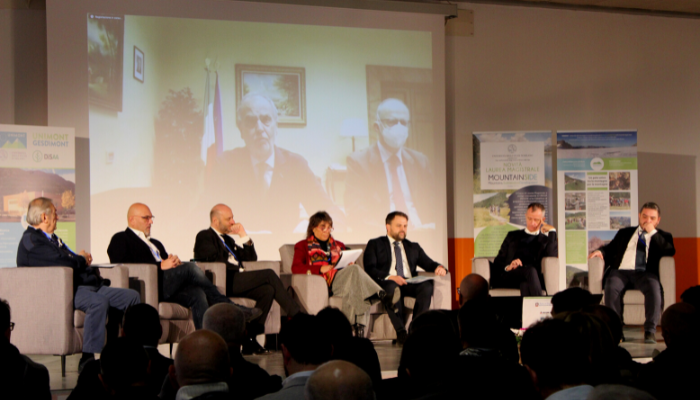