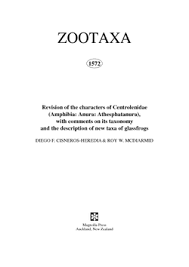 A phylogenetic analysis of all species belonging to the weevil genus Mecinus Germar, 1821 (Coleoptera: Curculionidae: Curculioninae: Mecinini) was carried out. Mecinus are exclusively Palaearctic and feed on Plantaginaceae belonging to the tribes Plantagineae and Antirrhineae. Based on a cladistic analysis of six outgroup and 47 ingroup taxa, and 31 adult morphological and three ecological characters, the monophyly of Mecinus appears strongly supported. In this genus six species groups and one monobasic group were recognized. Many species are morphologically similar to one another and lack phylogenetically useable apomorphies; thus for practical convenience these species, which produce highly polytomic topologies, have been treated as the M. pascuorum and the M. elongatus complexes. However, a large assemblage of species, characterized by elongate body shape, appears well supported. This includes the M. collaris, M. circulatus, M. heydenii and M. janthinus groups together with the M. simus group where a reversal to the primitive oval body shape in some species is presumed. Other well supported groups are the M. paratychioides and M. marina groups that appear more related to species of the M. pascuorum complex than to the main clade of elongate species. Optimizing host plant preferences onto the morphological phylogeny indicates that feeding on Plantagineae was the plesiomorphic condition for the genus Mecinus. All species feeding on Antirrhineae, which represent a minority, are included in two well supported groups, the M. heydenii and M. janthinus groups, which however do not share unequivocal morphological synapomorphies. In general there are no strict relationships between groups of weevils and their specific feeding habits, since larvae of closely related species adopt different strategies, such as seed predators, stem borers or gall inducers. Similarly no distinct biogeographic pattern of Mecinus has been observed in light of the phylogeny.